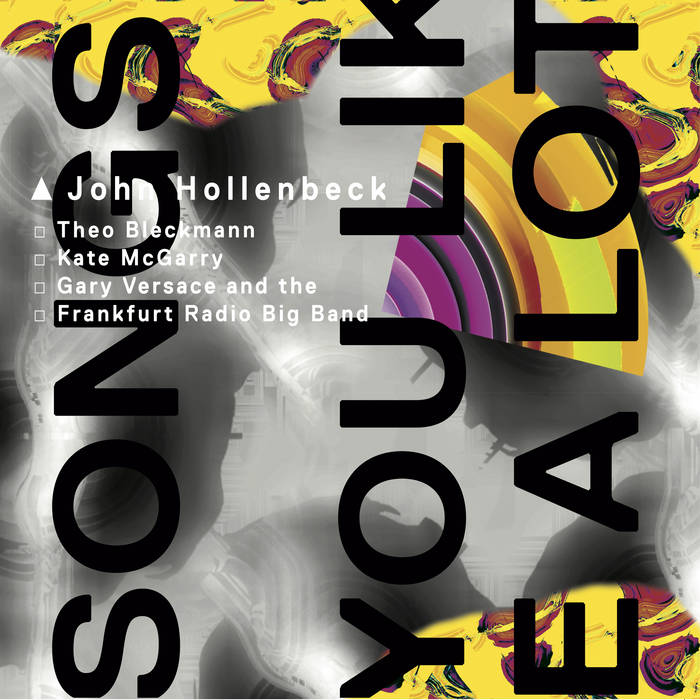 This is the final chapter of a trilogy of albums in which I explored and arranged popular songs. The entire project was made in collaboration with vocalists Theo Bleckmann and Kate McGarry, pianist Gary Versace, and the Frankfurt Radio Big Band. For the first recording, Songs I Like A Lot, I selected the majority of the songs for the album. Many of the songs I chose were from my childhood, and as I started to really listen to them again, I was surprised by how well I actually knew them. The second recording, Songs We Like A Lot, is composed primarily of songs that Theo and Kate liked and chose for me to arrange. Uri Caine held down the piano chair on this recording. And for this third and final recording, Songs You Like A Lot, we asked listeners to nominate their favorite songs for me to arrange. We then had an internet-wide vote on a list of nominated songs, and I chose (with the help of Kate, Theo and Gary) from the top 20 most popular songs.

This project brought up questions I asked myself numerous times: What is arranging? Why arrange? Why arrange popular songs? Is it still a “pop” song if it was not “popular”? Must the original still be recognizable in the arrangement? What can you arrange and what must be left intact so that the original is still there? When does it stop being an arrangement and transition to being a re-composition or original-composition-based-on-another-piece? And, do you have to like a song or composition to be able to create a good arrangement of it? Going into the project, my answer to this last question was “yes,” but now at the end of this project, my answer has changed to a definite “no.” As it turns out, for this recording, I was able to enjoy arranging pieces that I did not know or, in some cases, even like. This brought up subsequent questions: What does it mean to “like” a song? Is it possible to know a song so well, so completely, that even though you don’t really like the song, you realize that because you have heard it so much and know it so well, you end up kind of liking it anyway? (Yes!) And finally, how do you arrange something that you really do like, that you’re not sure you should even try to change?

What I do know is that above all, I want the listener to be reinvigorated and have their interest in the original versions of these songs revived! Through the course of this entire project, I have come up against many listeners that are so attached to the originals that any changes are considered blasphemy! I understand their feelings, but I also believe that this could be a great lesson in non-attachment? The Buddhists would say non-attachment is the key to happiness, so for the "poo-poo’ers" out there, consider this a path to enlightenment!

My arrangements may also highlight facets of these songs that were not obvious to the listener in the original, perhaps revealing hidden and exciting new layers. I sought to emphasize material that is present in the original, but not featured or in the foreground. I also tried to rewind what I perceived may have been the original compositional process to then figure out what I would do from that same point of departure. This approach always brought me down a much different path than the original composer. Throughout the course of this entire project, I also learned new methods of arranging that center in on how to change the original as little as possible while still achieving something “new.”

To give you some specifics on my process: in “Down by the River to Pray”, I let each verse exist organically in its own “room”, culminating in the last verse where all the “rooms” come together simultaneously. Keeping in mind the deep meaning this piece has to Kate, and many others, including myself, I tried to be very careful in not forcing the material, but allowed it to be what it wanted to be.

The Refuge Trio, a collective trio I have with Theo and Gary, was originally formed to perform in a Joni Mitchell tribute concert in New York City. In fact, the name of the band comes from her song "Refuge of the Road". Having performed her work extensively, I knew that Theo could make “Blue” come to life in his singular way. I tried to do as little as possible with this one and mostly orchestrated the original piano part.

“How Deep is Your Love?” is a nostalgic tune for me. All of the Bee Gees tunes remind me of what was on the jukebox in the local bowling alley where I would bowl on Friday afternoons as a kid. Looking at the song many years later, the title’s question "How deep is your love?" took on an even deeper meaning to me and I heard an urgent intensity in these words, which I chose to emphasize.

The classic “Fire and Rain” by James Taylor was one of the most challenging pieces to arrange because I'm simply in love with the original and was reluctant to even touch it. I imagined how Kate would bring her own magic and then subtly shaped the original by accentuating certain qualities that were present but not explicit.

The Kate Bush/Peter Gabriel pairing in “Don't Give Up” seemed very suitable to Kate and Theo, but in order to get away from the original, I thought it would be interesting to have them switch parts. This concept of switching is explored also in the last section of the song with an escalation of intense vocal hocketing. While the original version of this song fades out like a gentle pat on the shoulder, I chose to end this arrangement with a coach-like fervor, imploring: "DON'T!” (GIVE UP)

“Kindness” doesn't officially belong on this album of arrangements because it is an original, but I love this magical poem by Naomi Shihab Nye and want more people to hear it!

“Pure Imagination” was arranged with Gary Versace and Theo Bleckmann in mind. These two musicians embody pure imagination to me, so I created a musical fantasy world as described by the lyrics for them to explore and make magic in!

The easiest solution to arranging extremely popular songs like “God Only Knows” (which was #1 on the voters’ list), is to simply re-orchestrate it. I chose instead to challenge myself to re-cast this classic in a new light. I had such a great time re-arranging the lyrics that this became the key to finding what often sounds like a completely different piece, which I call “Knows Only God.” Perhaps after several listenings of both versions, you will start to hear that “God only Knows” is still totally present and intact!

A huge debt of gratitude goes to Olaf, his team, the band, Kate, Theo, Gary, Uri and my wife, Kate for making this trilogy possible!

SONGS YOU LIKE A LOT
John Hollenbeck
with Theo Bleckmann, Kate McGarry, Gary Versace and the Frankfurt Radio Big Band