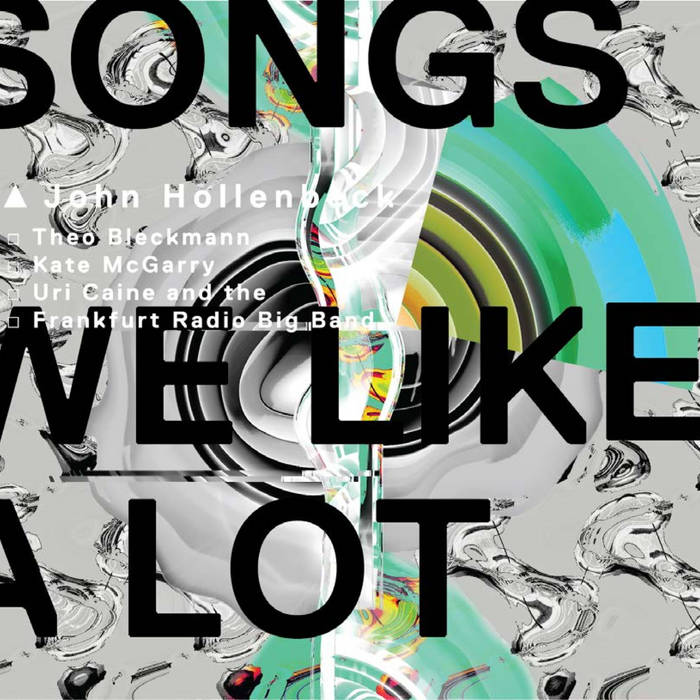 The drummer and composer John Hollenbeck uses an orchestra as a panoramic canvas, blending color and texture with an eye toward the sweeping view. His new album, “Songs We Like a Lot,” features an imaginative reframing of nominally unlikely fare — the Carpenters’ smash “(They Long to Be) Close to You,” the Fifth Dimension hit “Up, Up and Away” — performed by the Frankfurt Radio Big Band, with Theo Bleckmann and Kate McGarry on vocals. Nate Chinen

The New Yorker:
"The percussionist, composer, and arranger Hollenbeck may admire the work of Pete Seeger, Burt Bacharach, Cyndi Lauper, and others, but that doesn’t mean he treats it as if it were scripture. On his new album, “Songs We Like a Lot,” a collaboration with the Frankfurt Radio Big Band and the vocalists Theo Bleckmann and Kate McGarry, Hollenbeck radically reshapes tunes like “Close to You” and “True Colors” with impunity.

How to follow-up a Grammy-nominated album disarmingly called Songs I Like a Lot? By broadening the canvas and releasing Songs We Like a Lot, of course. John Hollenbeck returns after the triumph of Songs I Like a Lot, accompanied again by vocalists Kate McGarry and Theo Bleckmann and pianist Uri Caine, with an expanded palette and even more robust sonic transformations, encompassing everything from Burt Bacharach to the poetry of Kenneth Patchen, from Cyndi Lauper to a deconstructed “Get Lucky.”

A combination of indelible pop tunes and his own compositions, Songs We Like a Lot is propelled throughout by Hollenbeck’s creative arrangements for the Frankfurt Radio Bigband. These arrangements are heard to spellbinding effect in the album’s opener, a moving reimagining of “How Can I Keep From Singing.” The song is most strongly associated with Pete Seeger, and co-written by him; this rendition is intended as a tribute to the recently departed folksinger, who passed away only last year. A slowly swelling opening fanfare gives way to a steady pulse, which in turn builds, via a lovely tenor solo by Steffen Weber, to a rich crescendo, the horns framing delicious harmonies from McGarry and Bleckmann.

Like Miles Davis before him, Hollenbeck plucks a Cyndi Lauper hit -- in this case, “True Colors,” penned by Tom Kelly and Billy Steinberg -- from the pop pantheon, chopping and screwing it into a reconstituted suite that retains the lilting flow of the original while using new harmonies and repetitive motifs to recontextualize the beauty inherent in the song. (And not least rescuing it from Kodak-ad purgatory.)

Among the Hollenbeck originals is “The Snow Is Deep on the Ground,” a delicate composition that originally appeared on the Claudia Quintet’s What is the Beautiful? Bleckmann sings words by poet Kenneth Patchen in both versions; here, rather than the skeletal framework of the quintet, his voice is embraced by a full brass and woodwind blanket of sound. Pianist Uri Caine and vocalist Kate McGarry are two new additions to this lovely, enlarged version.

Another poet’s words figure in the Hollenbeck original “Constant Conversation” --- those of 13th-century poet and mystic Rūmī. “Constant Conversation” uses Middle Eastern musical motifs to undergird McGarry’s spoken-word vocal. A riff and a drone and an unerring sense of melody allows Hollenbeck to create an atmosphere that feels at once deeply personal and innately global. This is sole tune on which keyboardist Gary Versace appears on this record, though his piano was heard throughout Songs I Like a Lot.

What John Kelman in his AllAboutJazz.com review of Songs I Like a Lot called “Hollenbeck's skill at taking small but defining motifs from an original song and use them as starting points for broader orchestrations” is on full display in his reworkings of the pop chestnuts “Close to You” and “Up, Up and Away.” The latter reaches heights never dreamed of by original performers The Fifth Dimension and composer Jimmy Webb. A pulsating fever-dream of horns in flight, “Up, Up and Away” provides the album’s closing burst of color and beauty.

Meanwhile, the Bacharach and David tune “Close to You,” popularized by The Carpenters, maintains the lovely falling harmonies of the original, while Hollenbeck and McGarry extend the refrain repeatedly in a stirring, not-entirely-unsettling bit of musical mesmerism. Other highlights include a brief “de-rangement” of the Daft Punk smash hit “Get Lucky,” based, according to Hollenbeck, “on what I think the Russian Police Choir should have sounded like when they sang it at the Sochi Olympic Games opening ceremony.”