by The Claudia Quintet with special guest : Eileen Myles 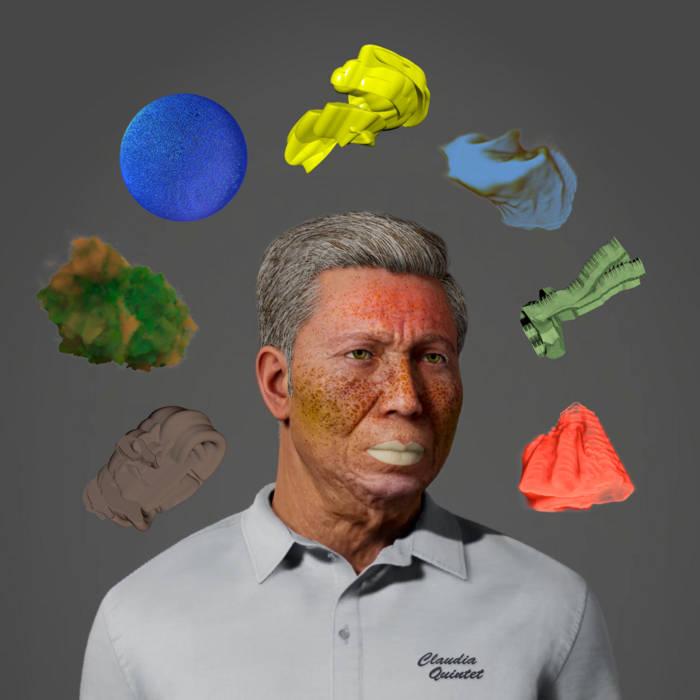 There's an old revolutionary adage that one of the first things you should do when you take over is seize the means of communication, because once you control the message you have real power. In an age of information overload and manipulation, parsing the truth out of the messages we read and hear and see is a Herculean task; a challenge taken on by drummer/composer John Hollenbeck, poet Eileen Myles, and the Claudia Quintet on their new album, Evidence-Based.

The story of the album starts in 2017, when the Centers for Disease Control (CDC) outraged many by apparently banning seven words from use in their official documents: "evidence-based," "transgender," "entitlement," "fetus," "diversity," "science-based," and "vulnerable." It subsequently turned out the words were discouraged rather than banned, but by then the onslaught of the news cycle had already pushed the story out of public awareness. Hollenbeck paid attention.

"The CDC has become very important," Hollenbeck said, "and we've seen the repercussions of politicizing the CDC during the pandemic. At some point I realized this story that everyone forgot about is relevant to what we're all dealing with right now."

Hollenbeck started out by using six of the seven words as the titles of new pieces. His musical transliterations of the terms range from punning ("Evidence-Based" contains rhythmic elements from Thelonious Monk's "Evidence") to direct ("Fetus" has a soundscape that sounds womb-like) to aspirational ("Transgender" takes a very loaded word and places it in a gentle, beautiful setting).

Hollenbeck met poet Eileen Myles several years ago when both were in residence at the MacDowell Colony artists retreat. He contacted Myles and asked them to collaborate. Myles described the process:

"The first thing I received was the vocabulary list," Myles said, "which ended up being the titles of each of the things I wrote. Some time after that John gave me rough cuts of the tracks. I liked the music a lot, so that was great news. I do a lot of things at once all the time, and so sometimes the way to focus is to get the hell out of town. So I went up to Provincetown [MA] for the weekend and listened to the music a lot and took a lot of notes and tried to create a reality in which these pieces had some meaning."

Myles's poems (or "talks" as they call them, to pair them with the music created by the band) are, for the most part, not direct statements about either the CDC story or even the usual meaning of the words themselves. Instead they offer yet another lens on language and its use, one that compliments Hollenbeck's music.

"A piece of music always has a vibe and a pace and a context and a momentum," said Myles. "So I wanted to imagine occupying that in a different way. Sometimes John would indicate 'from this moment in the cut to this moment is where i imagine you,' so that contributed to the size or the amount of language I was going to construct. Because the words refer to a kind of government, I felt like I had to be inventing a government in which these texts would occur."

The current membership of the Claudia Quintet is Hollenbeck on drums, tenor saxophonist Chris Speed, bassist Drew Gress, Matt Moran on vibraphone and Red Wierenga on accordion and piano. Gress and Wierenga also added an electronic score for "Fetus." The band has been together for a long time, though Hollenbeck notes that


as they age and get married and have kids, the challenges mount for the ensemble. Despite those difficulties, or maybe because of them, the band sounds committed and cohesive and exciting on Evidence-Based.

The new album is being released on Flexatonic Records, the label attached to Hollenbeck's nonprofit Flexatonic Arts. It's part of a plan to bring all of Hollenbeck's albums under one label.

"I've been gathering up all of my releases from various labels," Hollenbeck said. "Some of the labels didn't exist anymore anyway. We'll be releasing all these records on Bandcamp, the preferred platform for musicians at the moment. Our first release was Songs You Like A Lot. Evidence-Based is the second release overall and the first by the Claudia Quintet. We're going to simultaneously re-release two of our older records, Super Petite and our other poetry record, What Is The Beautiful."

Besides being a direct comment on a particular news story, Evidence-Based also tackles, by its existence, the idea of how the arts and politics interact.

Said Myles: "I betray my politics all the time in my work. There's no way to keep the conditions of our moment out of the work. It's impossible. It's like using specific details of people's names and locations. You can choose to be abstract and not drop points on the map but why? Everybody knows you're on the map. It doesn't matter if I know the name of the tree but the name of the street might be nice. I think the specificity of politics is exciting and edgy to include. I don't have to but I can't help it. "

Hollenbeck is on the same page: "I think you can't avoid it and shouldn't avoid it. I don't want to come down on people but I find you can provide some information or a different way to look at the same thing. The music is aspirational. I'm not in a vacuum. I'm hearing all the news everyone else is hearing. Then I go into the practice room or the composing room and it's not like that stuff goes away."

In many ways, our current social, technological and political conditions have already left Orwell's 1984 far behind. As we grapple with this new world, we need artists to help us find our center, to assist us in navigating the minefield. With Evidence-Based, Hollenbeck offers us a compass and a map. We all end up feeling a little less lost.

Matt Moran: vibraphone
recorded in the music room on Van Buren St, Brooklyn when no one else was home


Compositions by John Hollenbeck - Grand Blvd Music ASCAP/GEMA
“Talk” by Eileen Myles (unpublished)
All rights of the manufacturer and of the owner of the recorded work reserved. Unauthorized copying, public performance, broadcasting and file sharing of this recording prohibited
© 2021 John Hollenbeck Flexatonic Records